At Thumbies, we understand that everybody handles grief a little differently. Our partners in the funeral home industry have also recognized this phenomenon and some are finding new ways to help families accept a loved one's passing.

We have produced an article for the Order of the Golden Rule (an association of independently owned funeral homes), on how funeral home support dogs help families during the grieving process and how print keepsakes can provide a similar comfort.

If you or someone you know is having difficulties coming to terms with a loved one's passing, contact our customer care team or call us at (877) 848-6243 to be connected with our trusted grief support services. Visit ogr.org for more information on current trends in the funeral home industry.

Getting By with a Little Help from Our Canine Friends

Starbucks, which recently filed a trademark application for its popular “puppaccino,” is not the only one to have noticed the way we feel about our dogs.

Everywhere you turn, hotels, restaurants, and retailers are putting out the welcome mat – along with the bowl of complimentary dog treats – for the furry companions who accompany us almost everywhere these days.

To say that they are “part of the family” does not begin to capture the way we feel about our canine BFFs. And while the role that dogs play in human lives has never been a trivial thing, it’s a role that has been growing like a well-fed puppy in recent years.

The coronavirus played a part, as millions of people seem to have discovered a dog-shaped hole in their lives in 2020. From the stress and tedium of sheltering in place during a pandemic to many other varieties of emotional hardship, dogs are well suited to the job of soothing our worries, our loneliness – and our grief.

Numerous studies bear out the effect of pets on our sense of well-being, including changes to brain chemistry associated with reduction of stress and
anxiety.

So it’s not as groundbreaking as it may seem to learn that dogs are increasingly found in the role of grief support at funeral homes across the country – or that their own lives are increasingly memorialized with the same care and rituals once reserved for human losses. 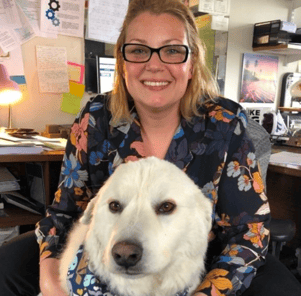 “He is very attuned to people’s emotions,” Hawkins said. “If someone is sobbing, he will just walk up and put his head in their lap.”

Willow also attends funerals and visitations and special events, but Hawkins says his most valuable role is in those early moments when grief is still raw and jagged and families are faced with the task of having to make the decisions around funeral arrangements.

The effect of having Willow around, she said, can be dramatic. “It’s a lot like having a baby in the room. It kind of lightens the mood. There are a lot of studies and research that show that interaction with an animal – even just petting them – is great for the chemicals in the brain … and the release of serotonin.”

For his part, Willow shows little interest in the research. “I’m pretty sure he has just decided that it is his job to walk around the room and get love from anybody,” said Hawkins.

At Lakeside Memorial, Willow joined the team not long after the funeral of a young canine patrol officer whose death during a training exercise in 2017 was mourned by the entire community and whose memorial services were attended by more than 80 trained therapy dogs provided through the Erie County SPCA’s “Paws for Love” program.

At the same time, other funeral homes and their clients were discovering the powerful solace such dogs provided in helping families get through the process of funeral planning.

The Evan J. Strong Funeral Home in Calgary was one of them. Around 2018, the staff decided to give it a try, and Molly, a friendly and fluffy bernedoodle, joined the team. Unlike most therapy dogs, Molly didn’t have any special training but she turned out to be a natural. 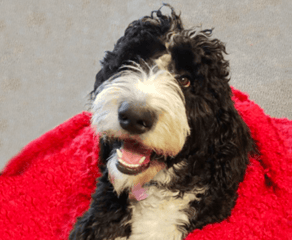 “She just had that personality and disposition. She was very gentle and understanding with families,” said the home’s founder Evan Strong, who is also the current OGR president.

“We had done enough research to know that dogs were a benefit and helped to calm people and get them through the difficult task of arranging a loved one’s funeral,” Strong recalled.

Last December, Molly died after a short illness, leaving the team with its own loss to mourn. “She was a member of our own family,” he said. “She was much loved.” And remembered. Molly was honored with a video tribute on the company’s website.

As a part of our families, dogs have also earned a place of their own in our rituals of grieving. It’s not unusual, in fact, to see dogs listed among the survivors in their owners’ obituaries. Or garnering full-fledged obituaries of their own. Some dogs, it seems, even have a way of easing their owners’ grief posthumously. 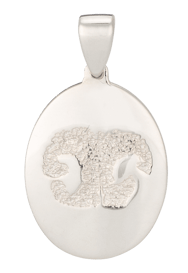 Susan Dice, director of customer care at Thumbies, a maker of jewelry and keepsakes that memorialize pets as well as human loved ones, says the company’s nose print pendants, rings, and other items evoke the memories of that little wet-nosed nudge that dogs use to cheer us up or finagle a treat, but still, “It does give you some peace,” Dice said.